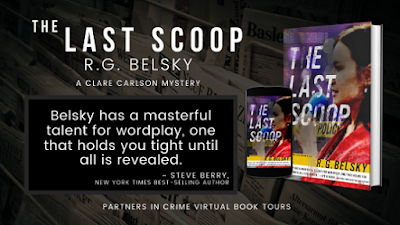 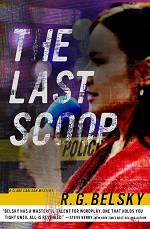 Martin Barlow was Clare Carlson’s first newspaper editor, a beloved mentor who inspired her career as a journalist. But, since retiring from his newspaper job, he had become a kind of pathetic figure—railing on about conspiracies, cover-ups, and other imaginary stories he was still working on. Clare had been too busy with her own career to pay much attention to him. When Martin Barlow is killed on the street one night during an apparent mugging attempt gone bad, it seems like he was just an old man whose time had come. But Clare—initially out of a sense of guilt for ignoring her old friend and then because of her own journalistic instincts—begins looking into his last story idea. As she digs deeper and deeper into his secret files, she uncovers shocking evidence of a serial killer worse than Son of Sam, Ted Bundy, or any of the other infamous names in history. This really is the biggest story of Martin Barlow’s career—and Clare’s, too—as she uncovers the path leading to the decades-long killer of at least twenty young women. All is not as it seems during Clare’s relentless search for this serial killer. Is she setting herself up to be his next victim?

I have read all of Belsky's novels featuring Clare and I think this is the best one yet. I really like Clare as a character. She is a tenacious journalist. Even though she manages the news broadcasts at Channel 10, she is an investigator at heart. When she is presented with a mystery by her mentor, she is on the case. I like how Belsky combines snippets of Clare's personal life with her ongoing investigation of the mystery. It makes Clare come alive as a character with issues and feelings of her own.

I really liked the plot too. The mystery Clare's mentor was investigating before he was murdered centers on a decades old unsolved murder and additional unsolved murders that might be connected. Perhaps a serial killer is still on the loose. Clare systematically went after clue after clue, often to the dismay of her boss at the TV station and even the FBI.

That Belsky is himself a journalist comes through in how well he portrays Clare and her investigative work. I recommend this novel to readers who like a compelling plot involving a complicated serial murder case tackled by a tough journalist. I certainly hope Clare will involved in another mystery soon. I'll be watching for it.

R. G. Belsky is an author of crime fiction and a journalist in New York City. His newest mystery, Below The Fold, was published in May 2019 by Oceanview. It is the second in a series featuring Clare Carlson, the news director for a New York City TV station. The first Clare Carlson book, YESTERDAY'S NEWS, came out in 2018. It won the David Award at Deadly Ink for Best Mystery of 2018. Belsky previously wrote the Gil Malloy series – THE KENNEDY CONNECTION, SHOOTING FOR THE STARS AND BLONDE ICE – about a newspaper reporter at the New York Daily News. Belsky himself is a former managing editor at the Daily News and writes about the media from an extensive background in newspapers, magazines and TV/digital news. He has also been a top editor at the New York Post, Star magazine and NBC News. Belsky won the Claymore Award at Killer Nashville in 2016. He has finished several times as a Finalist for both the Silver Falchion and David Awards. YESTERDAY'S NEWS, was also named Outstanding Crime/News Based Novel by Just Reviews in 2018 and was a Finalist for Best Mystery of 2018 in the Foreword INDIES Awards. His previous suspense/thriller novels include LOVERBOY and PLAYING DEAD. Belsky lives in New York City.

Visit these other great hosts on this tour for more great reviews, interviews, guest posts, and giveaways!
Click here to view the The Last Scoop by R.G. Belsky Participants.

I'm with you!! I love this series and can't wait for the next book!!!!