Miranda and the D-Day Caper Blog Tour and Giveaway

Miranda and the D-Day Caper 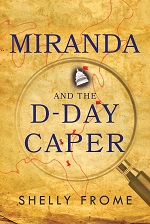 A modern day mystery with WWII tactics, old-time heroes and values, and the efforts of two amateur cousin sleuths from the Heartland.

On a sparkling spring morning in the Blue Ridge, small-town realtor Miranda Davis approached the tailgate market, intent on dealing with her whimsical cousin Skip’s unexpected arrival from New York. It turns out that Skip was on the run and, in his panic, grabbed his beloved tabby Duffy, recalling that Miranda had a recent part in solving a case down in Carolina. His predicament stemmed from intercepting code messages like “Countdown to D-Day,” playfully broadcasting the messages on his radio show over the nation-wide network, and subsequently forced to flee.

At first, Miranda tried to limit her old childhood companion’s conundrum to the sudden abduction of Duffy the cat. But the forces that be were hell-bent on keeping Skip under wraps by any means after he now stumbled close to the site of their master plan. Miranda’s subsequent efforts to decipher the conspiracy and somehow intervene placed both herself and her old playmate on a collision course with a white-nationalist perpetrator and the continuing machinations of the right-wing enterprise, with the lives of all those gathered for a diversity celebration in nearby Asheville and a crucial senatorial vote on homeland security hanging in the balance.

Frome's novel is a timely one, highlighting a right wing militant group preparing to cause harm to incite political action. I like the heroine, Miranda. She is a quirky but tenacious woman. It takes her a long time to gather the information she needs. Even though her cousin comes to her with a problem he wants her to work on, it takes what seems like ages for him to actually articulate the issue.

The plot is revealed slowly. In fact, it wasn't until nearly half way through the book that I finally understood what was going on. Part of the reason is Frome's writing style. His writing does not convey ideas to me as clearly as most authors. Another issue I had was the dialogue. The characters are so quirky that their conversations are not as clear and revealing as I'd like.

This is a novel for readers who like a complex and slowly evolving plot. You'll enjoy the quirky characters who ultimately make the novel enjoyable.

“Okay, I get it,” said Miranda, assuming it was playtime as always. “We’re double agents. You keep reading the paper and light a cigarette. A minute later, you toss the cigarette and leave the book of matches on the table with the coded inscription Moscow rules. That’s when I take it and slip away awaiting further instructions.”
This was flippant Miranda. The one with the short bob, over thirty, just trying to set the tone on this glorious Saturday in the Blue Ridge and ease out of it. But at the moment, playful Skip seemed to have lost his way. His eyes were bloodshot, underscored by dark circles. And the signature mischievous smirk on that sliver of a face had been replaced by a worrisome twitch.
Folding the newspaper, with his cornflower blue eyes still gazing into the distance, Skip said, “I don’t know, kiddo. I tell you, I just don’t know.”
“Which makes two of us. So tell me why you couldn’t simply e-mail me?”
“Why? Am I holding you up or something?”
“No, you’re not holding me up. Look, what do you say we cut to the chase? Glancing around, taking his sweet time, making sure no one was within earshot, Skip said, “All right.”
“From the top.”
“Okay. Like I indicated, I was filling in, got a break on a prestige AM station.”
Getting more anxious by the second, his lanky body beginning to twitch, Skip said, “So, when opportunity knocks, you seize the day. Right?”
“Out with it. I am still waiting.”
Scrunching forward this time, Skip said, “One night I started to wing it. No more of this ‘Yup, it’s midnight, folks. Some of these homespun Indiana tales should ease you right off to sleep.’ I was antsy. I’d had it with Russ Mathews who’d signed off that night right before me, sounding more and more like some fear monger back in the day.”
“And what day was that?”
“World War Two.”
More glancing around on Skip’s part. More checking the flow of visitors coming and going.
Getting antsy as well, Miranda said, “Will you get on with it? Is there an upshot in our future? ”
“I’m coming to it,” Skip said, looking right at her this time. “Right after my kazoo rendition of I dream about the moonlight on the Wabash, I lean into the mic and say, ‘Guess what? Ole Russ Mathews must be on to something. I’m talking the plot against America. So I tell the insomniacs all over the Liberty Broadcasting system that, at first, I thought Duffy was pulling down on the blinds out of longing.”
“Duffy?”
“Just your average ginger house cat, left alone, separated from other felines on the prowl. But I come home to my sublet and notice he’s perched in the exact same spot, his green eyes staring across the street. So, over the airwaves, I said, ‘What if I told you night people something was up in a dilapidated rooming house in Hoboken? Right across the river from the Big Apple?’” “That does it,” Miranda said, getting to her feet. “How am I supposed to follow this? When you’re ready to get to the point, let me know.”
“Wait a minute. Don’t you see?” said Skip, getting to his feet as well. “I stumbled onto something. Before you know it, my ratings are starting to climb. But since the weather’s getting warmer, those guys across the street aren’t scurrying in and out of the cold. They’re loitering by the stoop, glancing across the shadows. Next thing I know, I’m getting negative call-ins. Listeners telling me to knock it off or else. Undaunted, I tell everyone in radio-land what’s going on out there may have far reaching consequences. Unless I intercept.”
“Oh, please,” said Miranda, walking away. “Listen to me.” Skip scurried over and held her arm. “I tell you, at the same time, those guys across the street were carting off concealed stuff.”
“I’m not listening anymore.”
“You’ve got to. You have obviously become a born tracker. Tracked down a poison pen perpetrator like the paper said.”
“Enough. Stop hyping everything up. Look at you. You’re coming down with full blown hysteria.”
“Exactly. Because it appears there’s no longer any line between entertainment and politics. While messing around, doing a take-off on Russ Mathews and boosting my ratings, I may have stumbled onto an actual plot utilizing WW II codes.”
***
Excerpt from Miranda and the D-Day Caper by Shelly Frome. Copyright 2020 by Shelly Frome. Reproduced with permission from Shelly Frome. All rights reserved.

Shelly Frome is a member of Mystery Writers of America, a professor of dramatic arts emeritus at the University of Connecticut, a former professional actor, a writer of crime novels and books on theater and film. He is also a features writer for Gannett Media’s Black Mountain News. His fiction includes Sun Dance for Andy Horn, Lilac Moon, Twilight of the Drifter, Tinseltown Riff, Murder Run, Moon Games and The Secluded Village Murders. Among his works of non-fiction are The Actors Studio and texts on the art and craft of screenwriting and writing for the stage. Miranda and the D-Day Caper is his latest foray into the world of crime and the amateur sleuth. He lives in Black Mountain, North Carolina.

Visit these other great hosts on this tour for more great reviews, interviews, guest posts, and giveaways!
Click here to view the Miranda and the D-Day Caper by Shelly Frome Participants.

This is a rafflecopter giveaway hosted by Partners in Crime Virtual Book Tours for Shelly Frome. There will be 2 winners of one (1) Amazon.com Gift Card each. The giveaway begins on May 1, 2020 and runs through June 2, 2020. Void where prohibited.

I enjoy quirky characters so thinking I will pick up a copy!