by Julian Iragorri and Lou Aronica 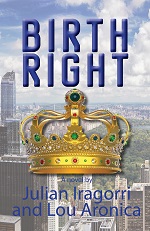 In the mid-sixties, a young woman and a young man meet and begin the romance that will define their lives throughout the decades. In the early nineties, two young men meet and forge a friendship that will propel both into newfound worlds. Today, those same two men face a reality that could change the course of the world . . . and a fantasy that both have only dared to imagine. How these three stories come together is the driving pulse of BIRTH RIGHT, a novel about despots and rulers, spouses and lovers, friendship and brotherhood. Playing out at once on the most global and the most intimate of stages, it is a story about the power one is born into and the power one earns and, at its very heart, the power of love.

This was an interesting novel. There was a little romance, some politics, a paranormal aspect, and the preservation of a small nation. It started off a little confusing with two sets of characters in a number of time periods. I was glad to see that it came together near the end.

The most interesting aspect of the novel to me related to the actions of the nation's evil Prime Minister. He made executive decisions regarding trade and tariffs that would ultimately hurt the nation. He tried to subdue the press and punish the corrupt media.

I was surprised at the paranormal aspect to the novel. Alex, the main character, can see auras. He sometimes goes into a deep meditative state and converses with his long gone grandmother. There are even psychic attacks, although for the good.

The authors' writing style includes long passages of prose, challenging my continued interest. While the novel was not captivating, I did enjoy reading it.

Julian Iragorri lives in Manhattan. He has worked on Wall Street since the early nineties.

Lou Aronica is the author of the USA Today bestseller The Forever Year and the national bestseller Blue. He also collaborated on the New York Times nonfiction bestsellers The Element and Finding Your Element (with Ken Robinson) and the national bestsellers The Culture Code (with Clotaire Rapaille) and The Greatest You (with Trent Shelton). Aronica is a long- term book publishing veteran. He is President and Publisher of the independent publishing house The Story Plant.

Visit these other great hosts on this tour for more great reviews, interviews, guest posts and interviews!
Click here to view Birth Right by Julian Iragorri and Lou Aronica Participants

Thank you for your interest in this tour!

I really enjoyed this book and liked how it all came together.