Paul vs. James by Chris Bruno 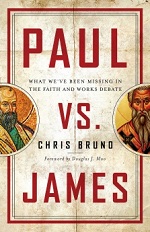 Some might think Paul and James make contradictory statements about faith and works. Bruno builds a case to show they were not opposed to each other. To do so he looks at their lives, giving context to their messages. He also reviews Abraham's life as both authors refer to him.

Bruno suggests “...James was combating a false faith that fails to give works their proper place as the necessary fruit of saving faith.” (104) James may very well have been responding to some false teaching. Paul, on the other hand, “...is arguing against phony works that are rooted in a failure to see that faith is enough.” (105) We know from Paul's writings he was, in fact, combating false teaching. The two had a different emphasis yet had a unified voice. With respect to Abraham, Paul focused on Abraham's initial faith while James focused on the subsequent works of obedience.

Bruno's writing style is easy to read as the material is not scholarly and would be great for newer Christians puzzled by the faith/works issue. Readers would receive lots of background information, biblical material seasoned Christians would already know, including an exploration of justification.

Chris Bruno (PhD, Wheaton College; MDiv, Southern Seminary) serves as assistant professor of New Testament and Greek at Bethlehem College & Seminary in Minneapolis, MN. He previously taught Bible and theology at Cedarville University and Northland International University and served as a pastor at Harbor Church in Honolulu, Hawaii. Chris and his wife, Katie, have four sons.

I received a complimentary copy of this book from the publisher. My comments are an independent and honest review.
Posted by Joan Nienhuis at 6:36 AM