Free to Believe by Luke Goodrich 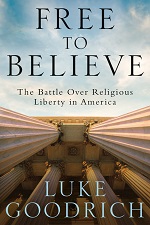 He informs us by exploring the roots of religious freedom. They are grounded in the Bible, not national documents. Goodrich also reviews a number of issues and court cases so we understand the challenges facing us today with respect to our current culture. He then give suggestions to how Christians can move forward.

I like how he explained religious freedom and how it relates to other freedoms. He gave an example where my religious rights might violate the property rights of someone else. The property rights would win. (28) It's a simple example of issues that get very complicated.

Goodrich helped me understand how the feelings toward Christianity have changed in the last decades. Recently, Christian beliefs were viewed as incompatible with culture but were tolerated. Now, many often view Christian beliefs as a threat to current culture. He looks at many issues and suggests that the conflict most threatening to religious freedom in the US today is the conflict between gay rights and religious freedom. (95)

What are Christians to do? I was surprised that Goodrich's first suggestion was that we shouldn't be thinking about winning. “Our primary concern is not defeating our enemies but loving them” (154) We are to be Christlike and that means suffering. We are to consider God's greater purposes for the world. But he also gives some very practical suggested for individuals and churches to be prepared to live faithfully as Christ followers.

I highly recommend this book to lay Christians and church leaders. It contains information every Christian would do well to understand.

Luke Goodrich is an attorney at the Becket Fund for Religious Liberty (BecketLaw.org), where he has won multiple Supreme Court victories for clients, including the Little Sisters of the Poor and Hobby Lobby. He has frequently discussed religious freedom issues on major media outlets and in major publications. He also teaches an advanced course in constitutional law at the University of Utah law school. He lives in Utah with his wife and children.

I received a complimentary uncorrected proof from the publisher. My comments are an independent and honest review.
Posted by Joan Nienhuis at 6:16 AM