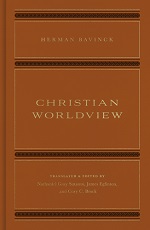 Scholars spoke and wrote differently a century ago and this work gives evidence to that. I had difficulty following the unfamiliar style of prose. Many of the philosophers and scholars mentioned are unfamiliar to me. For a layperson interested in how a Reformed Christian worldview was crafted a century ago, this was an unsatisfying read. Bavinck's work here is not so much an exploration of a Christian worldview as it is a philosophical argument that all things find their origin in God.

A few nuggets I understood: “No matter how we look at it, the concept of truth and science – if we think consistently and without prejudice – brings us to Christian theism.” (Loc 419/1469) Everything exists because of reason, hence God. Such is the foundation of all knowing and the basis for our ability to observe and reason. Denying God is denying the foundation for all science. (Loc 443/1469)

I received a complimentary egalley of this book from the publisher. My comments are an independent and honest review.
Posted by Joan Nienhuis at 2:49 PM