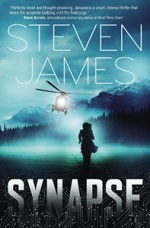 Thirty years in the future, when AI is so advanced that humans live side by side with cognizant robots called Artificials, Kestrel Hathaway must come to terms not just with what machines know, but what they believe. Is hope real for them, or merely an illusion?

Soon after experiencing a personal tragedy, Kestrel witnesses a terrorist attack and is drawn into a world of conspiracies and lies that she and Jordan, her Artificial, have to untangle. With a second, more brutal attack looming on the horizon, their best chance of stopping it is teaming up with federal counterterrorism agent Nick Vernon.

But the clock is ticking—and all the while, Jordan is asking questions that Artificials were never meant to ask.

Deftly weaving suspense and intrigue into a rich, resonant tale that explores faith and what it really means to be human, Steven James offers us a glimpse into the future and into our own hearts.

I have read a number of James' books, especially the Bowers Files. They were generally action packed.


This book was certainly different. Not only is it 30 years in the future but it is centered mostly on Kestrel and her experiences. There are some good discussions revolving around the issue of a good and powerful God allowing Kestrel's baby to die. There is also a good exploration of artificial intelligence, such as whether a robot could have a soul, believe in God, etc. Part of the plot development also questions advances in technology in general, whether they are good for mankind or not. The build to any suspense was very slow in coming.

I found the change in point of view disconcerting. Some of the book is from the universal viewpoint but much is from the first person. Kestrel's experiences are in the first person. There is often a change after a few paragraphs, perhaps several within one chapter. Also disconcerting was the change in action tense. Most of the novel was in the past tense. The exceptions were passages from Jordan's viewpoint and the opening scene.

Speaking of the opening scene, it is of Kestrel experiencing a still birth. It is a very emotional scene, written so that you feel you are experiencing the tragedy right along with Kestrel. Potential readers, particularly women, should know this. A woman who has had a similar experience might find reading that section very painful.

I found this novel to be the rather preachy in style. There are many discussions of God and salvation and heaven. I almost felt James designed the plot to revolve around what he wanted to communicate about Christian faith. This is a good novel for readers interested in exploring Christian faith with respect to artificial intelligence.

Steven James is the critically acclaimed, national bestselling author of sixteen novels. His work has been optioned by ABC Studios and praised by Publishers Weekly, Library Journal, the New York Journal of Books, and many others. His pulse-pounding, award-winning thrillers are known for their intricate storylines and insightful explorations of good and evil.  When he’s not working on his next book, he’s either teaching master classes on writing throughout the country, trail running, or sneaking off to catch a matinee.


“James is a pro at creating suspense.”
Criminal Element

“stimulating tale…thrilling story of greed and corruption”
Publishers Weekly STARRED review
Read my op-ed on robots and faith in the New York Times   I grew up reading and loving science fiction stories. I’ve always been intrigued by the idea of artificial intelligence, but as I’ve thought about it over the years, I’ve realized that our lives are not based just on what we know, but also what we believe. So, I started asking myself, “What would the world look like if machines developed artificial belief?” Within a few decades, advanced AIs might very well have consciousness and self-awareness. At that point, what will they choose to believe about the meaning of live, God, and the afterlife? All of these questions were in my mind as I wrote Synapse, a story that takes place 30 years from now in a world very much like our own. This is a cautionary tale with implications that are both chilling and revealing and I think that if you like suspense, you’ll love this near-future thriller.  Learn more at stevenjames.net Facebook and Twitter: @readstevenjames Buy the book: https://www.tnzfiction.com/synapse-a-novel/

I received a complimentary egalley of this book through Celebrate Lit. My comments are an independent and honest review. The rest of the copy of this post was provided by Celebrate Lit.
Posted by Joan Nienhuis at 6:07 AM

Artificial intelligence is a bit scary--hope it doesn't go as far as this story sounds like it does!