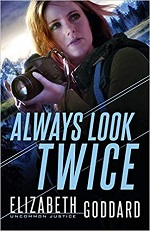 This novel has quite a bit of action but generally concentrates on character development. It starts out with Harper taking photos in a national forest. She spots a running woman who is then shot. The long range shooter then turns his sights on her. She scrambles away, falls and loses her camera. She is rescued by Heath, a local dude ranch owner who also happens to be a childhood friend. This sets up the dual plot lines of romance and trying to find the shooter.

The reason Harper, a forensic photographer, is out in the forest is because she is on leave is due to PTSD issues. She sort of saw her father killed when she was a child. The trauma of photographing criminal scenes has re-traumatized her. Oddly enough, Heath's mother died in a house fire when he was young. Both of them have issues to work through. The book contains long passages of character thought.

The plot is a bit complex. It has roots in the past, information we readers are not privy to. There are several red herrings in the present too. I was a bit puzzled when the FBI had so much information on the bombing culprit why they had not found him. If Emily could find out the information, certainly the FBI could!

This is a good novel for readers who like a concentration on character thoughts showing character development with action and suspense thrown in.

Elizabeth Goddard is the award-winning author of more than forty romance and romantic suspense novels. She is a Carol Award finalist and winner, a Daphne du Maurier Award for Excellence in Mystery and suspense finalist. You can find out more at www.ElizabethGoddard.com.

I received a complimentary egalley of this book from the publisher. My comments are an independent and honest review.
Posted by Joan Nienhuis at 6:32 AM