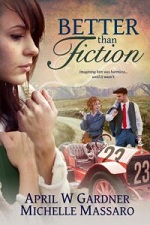 Imagining him was harmless…until it wasn’t.

Romance novelist Meghan Townsend’s marriage is slipping, and no amount of prayer seems to help. She aims to recapture her husband’s waning attention by getting in shape and finds escape by crafting her own fictional love story. Taking inspiration for the hero from a new friend—the attractive, spiritual, and attentive Curtis Jameson—she pours her yearnings onto the page, and craves the kind of pulse-pounding romance found in her book, Racing Hearts…

In 1916 Corona, California, motorcars are all the rage, and racing them is what Meghan’s hero, Russell Keegan, does best. But when his competition vandalizes his car, the only mechanic available is a greasy woman in a man’s overalls.

After a racing accident claimed her father’s life, Winifred became the sole breadwinner for her family. She is disdained as a female mechanic, but her daddy’s trade is all she has left. Can she swallow her hatred of the races and take up Russell’s offer of big bucks to fix his car, or will she lose everything to mounting debt?

Under Meghan’s skillful pen, these two embark on a thrilling, adventurous romance. But she finds that writing those love scenes with Curtis’s face in mind takes her heart places it shouldn’t go. Will she realize in time that real life can be better than fiction?

What a clever idea for a romance novel. I like how the authors deftly wove the current story with the historical one. While the obstacles to romance are different in the stories, overcoming the obstacles follow similar paths and the two plot progressions work well together.

And I liked both heroines. I could really identify with Winifred's necessity to delve into a man's profession when her family's welfare was at stake. I really felt for Meghan with her husband becoming distant and unresponsive. The combination of feeling called to write a novel and also using it to express her romantic longings was very reasonable.

I always like to learn something when I read a novel and in this one it was about car racing in Corona, California. I like a strong Christian message in a novel and was happy to find this one included one.

I recommend this Christian romance novel. It has a well crafted plot, engaging characters, and an informative historical location. I'll be looking for more from this author duo.

April W Gardner writes Christian historical romance with a focus on our southeastern Native tribes. She is a copyeditor, military wife, and mother of two who lives in South Texas. In no particular order, April dreams of owning a horse, learning a third language, and visiting all the national parks.

Michelle Massaro writes contemporary fiction, soaked in grace. She makes her home in Southern California with her husband of over two decades and their four children. She’s dabbled in homeschooling, teaching Creation Science, and leading worship. When she isn’t tinkering with words, Michelle enjoys old Rogers and Hammerstein movies, making kefir, and Sudoku. A new lipstick and a good French roast always make her happy.


More from April and Michelle


April and Michelle get a lot of questions about how exactly co-authors write a book. Who writes which part? Did you have any trouble, any conflict? Valid questions! But in the case of Better than Fiction, it was no trouble at all, and neither author can remember a single heated disagreement. In part, because they’d been critique partners for eons and were already working together seamlessly. It also helped that the story is made up of two intertwining novellas. Each author had her own blank canvas to color on with the other looking on and offering feedback. The most enjoyable part of the process was the challenge of making sure the events in the life of Michelle’s contemporary character (an author) influenced the characters’ decisions in April’s historical plot. Why intertwining stories? The idea behind it was to show what it’s like to live in the mind of a writer, how her real life makes its way into her stories. The theme of emotional affairs was a good fit, as it is often all too easy for women—even Christian woman—to be drawn to another man and justify it as harmless friendship rather than admit she is looking to this person to fill a need that only God and her husband are meant to fill. They decided to set the story against the backdrop of Michelle’s hometown of Corona, California in 1916 and the real-life Corona Road Race that took place in April of that year. It was the third race and, due to tragedy, the last. From concept to “The End,” it took a span of about four years for Michelle and April to publish Better than Fiction, and as far as teamwork goes, it went off without a hitch. April was able to fly from her home in Georgia to stay with Michelle’s family and do research, and later, Michelle flew to Georgia for a concentrated writing weekend. The two had an amazingly fun time writing and working together. Another question the authors get…will there be a sequel? Only time will tell.

And thank you, Joan, for the lovely review and hospitality here on your blog today!

Joan, thanks a bundle for this beautiful review! And for having Michelle and me on your blog today. Hugs!

This book sounds like a wonderful read. Great cover.

This sounds like a really fun story--with a good message to ponder, too.

I am enjoying these tours and finding all the terrific books my family is enjoying reading. Thanks for bringing them to us and keep up the good work.

This sounds like a great book that I would enjoy!