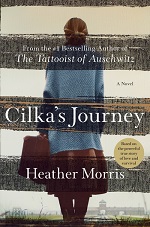 We've read novels illuminating the conditions in the concentration camps during WW II. Here we get a glimpse into the Siberian prison camps.

Morris has created the historical novel based on an actual young woman who, after years in a German concentration camp, is taken to Siberia. Cilka had been forced to have sex with German soldiers, as was the case with many of the women being held. The camp liberating Russians interpreted that as cohabiting with the enemy and thus assigned her to another camp for imprisonment, this time Russian.

This is a detailed fictional account of a young woman surviving under terrible conditions. Notes at the beginning and end of the novel inform readers as to which parts are historical and which are fiction.

This is the first book I have read by Morris and I was a bit surprised at the straightforward nature of the narrative. I was not captivated by Cilka as a character. I was a little disappointed in the lack of engaging scene structure in the freezing Siberian landscape. I actually started skimming a bit due to the day by day reporting style of the continuing narrative.

For readers who have not read about the Siberian camps, this may be a good read. Those who have read other fictional or historical accounts, may find this one a bit lacking.

Heather Morris is a native of New Zealand and now lives in Australia. For several years, while working in a large public hospital in Melbourne, she studies and wrote screenplays. In 2003 she was introduced to a man who might have a story and her debut novel, The Tattooist of Auschwitz was the result.

I received a complimentary egalley of this book from the publisher. My comments are an independent and honest review.
Posted by Joan Nienhuis at 4:08 PM