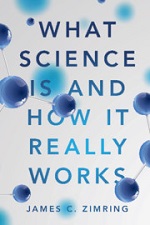 We hear that a medication has been scientifically proven to be effective. But what does that really mean? What is a “scientific fact”? Zimring helps non-scientists (and perhaps some scientists) understand what science is and the process by which science is done. He helps readers be able to tell if the science was done well and whether scientific claims have, in fact, gone beyond the limits of scientific knowledge. Yes, there are limits to scientific knowledge.

I like that he walks us through how scientists reason. He includes logic, something not routinely taught in scientific studies. (Loc 2063/6558) I like how he gives common day examples of reasoning and thinking. He points out the flaws of human thinking and how science has specific processes to try and address the potential errors. Even though the scientific process can evidence flaws, it is still the most effective means we have of understanding the natural world.

I like how Zimring addresses the differences in science and religion and why appealing to the divine is outside the realm of science. I was glad to see that he does not discount religion, noting that the two deal with different aspects of reality.

I was happy to see Zimring clarifying that science does not yield absolute truth. We just do not live in that kind of a universe. (Loc 1679/6558) Theories are never proven but rather corroborated by failed attempts to disprove them. (Loc 1202/6558)

This is a good book for readers who want to better understand how science is done and better evaluate the results of the scientific process. You'll gain some good insights into thinking in general and how conclusions are drawn. It is a long book but is well worth working through.

I received a complimentary egalley of this book from the publisher. My comments are an independent and honest review.
Posted by Joan Nienhuis at 5:31 PM