The Economists' Hour by Binyamin Appelbaum 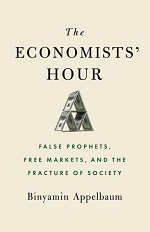 As one who has no understanding of economic principles, especially on the national level, I really appreciated this book. I began to understand the influence economists have had on US economic policies. I appreciated the history of how economists began to influence governmental decisions. I also appreciate more the tough decisions government officials need to make to keep the economy running as they desire. Do you print money to stimulate job growth or not? Do you cut taxes to stimulate the economy and raise interest rates to control inflation? Do you cut spending? How are decisions made when they affect other nations as well?

I'm not sure of Appelbaum's political persuasion but it seems he highlights the failed actions of Republicans while pointing out the successful actions of Democrats. He notes the failure of the Reagan “supply-side” economics. The promised benefits did not materialize after the rich saw their tax rates decline considerably. As a result, “After-tax income inequality in the United States rose faster during the mid-1980s than during any other period in the postwar era.” (Loc 1996/9460) Clinton restored tax hikes. “Under Clinton, the economy boomed and deficits vanished.” (Loc 2038/9460) Bush's tax cuts failed too, Applebaum notes, and the US had to borrow from China.

This is a long book and it took this layperson (with respect to economic and governmental policies) a long time to get through it. I'm glad I did, however, as now I understand more how difficult the task is to make the most effective economic decisions.

Binyamin Appelbaum writes about economics and business for the editorial page of The New York Times. From 2010 to 2019, he was a Washington correspondent for the Times, covering economic policy. He previously worked for The Charlotte Observer, where his reporting on subprime lending won a George Polk Award and was finalist for the 2008 Pulitzer Prize.

I received a complimentary egalley of this book from the publisher. My comments are an honest and independent review.
Posted by Joan Nienhuis at 6:13 AM